Sohvi, our four-month old personal pup, and Adi who recovered from both her surgery and brief bout with the kennel cough, were eating three times a day. Bina, who also had received a PACC Lulu’s Angel Fund mini-grant as well as funds from NAAVS and the Ian Somerhalder Foundation, is our other recently acquired handicapped, half-starved feral dog. Facing euthanasia, missing a part of her rear foot, terrified of people, Bina has been going through a difficult time accepting food, so we were trying all sorts of specially cooked foods from hamburger and rice to chicken tenders and strips for her. Anything to bring her weight up, gain her trust and bring her back to health.

Between morning meds, extra feedings and cooking I was now spending over three hours each morning taking care of the animals, often before I finished my first cup of coffee.

Our 17 year-old Chihuahua, Duchess, who was found starved and dehydrated in Phoenix over two years ago, continues to be hand-fed her baby-food mixture two to three times a day. Ancient, mostly deaf and blind she has two or three teeth and at her age dental work is unsafe as she might not come out of the anesthesia. At barely three pounds, she is one of the tiniest jewels in residence. We cater to her needs and care for her lovingly. When Duchess contracted kennel cough, she required medications in addition to her thrice-daily feeding schedule. Each tiny cough would wake me up at night or cause me to run into the bedroom to check on her during the day. While she remains on medications at this time, she appears to be on the road to recovery.

Bobby has taken the longest (so far) to recover. He was on medications for three weeks and still occasionally will cough for a moment or two. In addition to major skin and food allergies, Bobby has collapsed trachea so the constant coughing has been especially difficult for him. Many nights during the peak of his illness, his hacking cough would awaken me from a sound sleep and I would get up to give him more cough medication. Often I would not fall asleep again until dawn.

While CCR has five dogs on kennel cough medication at this time, the one concerning me the most is Harry. He woke me at 3:30 AM last night and kept me up until dawn with relentless coughing. Tomorrow, Monday, I call our Veterinarian to schedule an appointment for further testing, including a Valley Fever retest, and perhaps a change in medications. 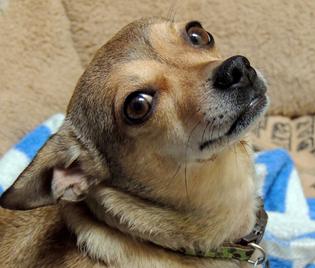 CCR took in Adi from one of the municipal shelters we work with in June. She was on the euthanasia list and would have been killed had we not committed to taking her. We were able to take her when we received a grant from Phoenix Animal Care Coalition’s (PACC911) “Lulu’s Angel Fund” as well as another small grant from NAAVS.

I drove over two and a half hours to pick her up. When I picked her up I was told she had been isolated and not exposed to any illness. When we arrived at our Veterinarian’s office in Tucson on our way home we found that the inoculation records were not in her paperwork. This had happened before and their staff simply forgot to enter the shots into the records…but this time we discovered that she had never had her inoculations. We inoculated her immediately, but 8 days later it became apparent that she had picked up Bordetella (“kennel cough”) at the pound.

The now-10 or so-month old Red Heeler had a long ignored, severely broken leg. Adi was in severe pain, and after we had X rays taken and had spoken with a number of Veterinarians and specialists, it was apparent that the break had occurred months previous to her arrival. We have had several three-legged “tripod” dogs here and knew she would do well. She was to become our most recent amputee. 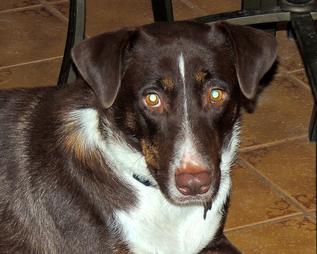 Even though she was quarantined with Bina, a dog who had all her inoculations and did not get ill, somehow the infection spread throughout the house, infecting nearly all of our dogs during the past 8 weeks.

During this time, while the first of numerous dogs began to show the hacking cough and malaise caused by Bordetella, we had to have Adi’s leg amputated. Another dog, a middle-aged Chihuahua-mostly named Bittie, had recently ruptured the cruciate ligament in both rear legs, a painful, non-healing condition which leaves the suffering animal crippled. We had found a wonderful surgeon in Tempe, 3 hours away in metro Phoenix, willing to work with us for a rescue-discounted rate and we were scheduled to have the first and most damaged leg surgically repaired.

While I was in Tempe waiting for Bittie I received an urgent phone call from my husband Jeff. One of our other dogs, the little blind girl Yassi, was pouring blood and pus from a previously undiscovered wound. Apparently she had been bitten by something or someone and had developed a huge necrotic skin infection. The next morning, she was taken to our Tucson Vet. Yassi also required immediate emergency surgery to clean out the festering wounds which were buried under her long fur and put drain tubes in.

I began by keeping a notebook for the sick dogs… a page for each dog who was sick, what antibiotic they were taking, when they began the medication and how long they would need to be on it, how often it was given daily and I was checking off each dosage as it was given. There was too much changing here to try to remember who and when and what…

At the peak of the insanity in addition to the three dogs who had gone through surgery, there were, at any given time and on any given day, at least four or five dogs on antibiotics and cough medications. At one point 6 dogs had kennel cough and were being medicated in addition to the girls recovering from surgery.

These dogs taking medications were in addition to the dogs who normally are given once or twice daily medications for such things as Valley Fever, arthritis, allergies, collapsed trachea etc. Remember the majority of CCR’s dogs are seniors or “special needs” animals including those with chronic medical conditions.

Bittie felt awful and would not take her tablets (antibiotics and pain meds) so I began “compounding” my own medication i.e. grinding up the tablets, dissolving the powder in a few cc’s of warm water and adding enough honey to create 2-3 cc’s of medication she would accept. While easy to administer, it was a little bit more time consuming and each five-minute segment adds up.

When Harry, who has Valley Fever and a therefore a long-compromised immune system, came down with kennel cough, he too decided not to take his antifungal capsules nor his antibiotic tablet…so I created a compounded honey based syrup for him as well. 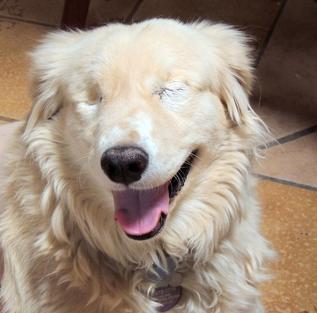 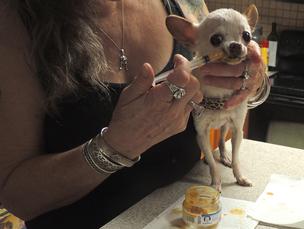 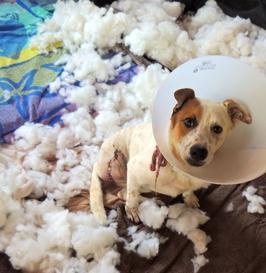 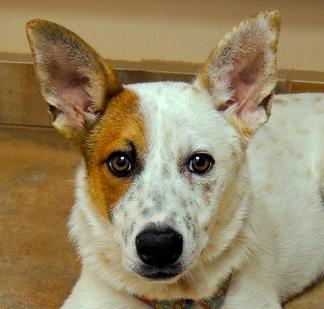 Top, some of the daily medication 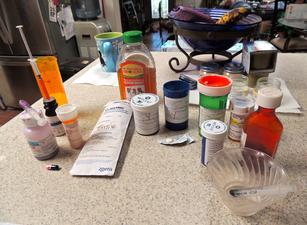 It has been over 8 weeks since the start of this madness, and although most of the dogs who were on kennel cough medications are now getting well, and the dogs who had surgery are in the final stages of recovery as well, I am not seeing an end in sight…yet...

...After all, there is a 12-year old little dog I have been publicizing to the rescue community…a tiny Chihuahua named Feo that no one seems interested in taking. Feo is at the high kill pound that we got Adi from, and will be facing euthanasia due to his acquired kennel cough and old age. He only eats soft food as he has only a few, rotting, teeth left and needs major dental work…

The dance goes on and this song never ends…

A Day in the Life of Rescue: A Personal Account

I have been working in rescue full-time for over 20 years. People who tell me they want to “do rescue” should be aware that while most weeks and months move along smoothly, anyone working with large numbers of animals will run into weeks and months like these:

Cochise Canine Rescue (“CCR”) is located on 5 rural acres in Southern Arizona. CCR is a very small operation. My husband and I are retired but I work full-time and then some for the animals in CCR's care. CCR specializes in elderly, handicapped, chronically ill and other “special needs" animals. Rarely do we take in animals who are adoptable. Often this is not by choice, but after arriving we find that the animal now in our care has been traumatized and will take months if not years of emotional recuperation before he or she can trust humans again.

CCR works with a large number of rescue organizations and individuals throughout the state, particularly in the southern and central portions of Arizona. On a daily basis I receive lists and posts online about injured animals, abandoned animals and animals in municipal shelters with days or hours left before they are to die. We share this information and attempt to get as many of these desperate souls to safety. Between all of us working together, a small percentage of animals are saved.

Although we have said many times that we are full to overflowing, when we can, often due to the death or adoption of one or more of our current residents, we will accept a new animal into our program, into our home and lives.