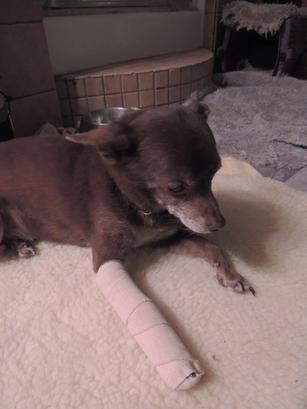 Today I learned that the time we have left with Billy may be limited.

Today I learned that our little Chihuahua, one who has had such a strife

Billy is, we think, 12 years old but we are not sure. We adopted him from

a friend who ran a small-dog rescue in Tucson about 5 years ago. He was

case. Billy was one of over 50 little dogs living in sadness and filth.

My friend adopted most of the little dogs quickly, but Billy was the last to

leave…because, as she told me…he didn’t like most people and

that had me drag Jeff over to her home one summer evening. Surprisingly

– or perhaps not - it was Jeff that Billy immediately went to. Sitting on lawn

chairs in my friend’s back yard, Billy climbed up into Jeff’s lap…and that

was that. He went home with us. Billy was then close to eight years of age.

Billy has been a central figure in our lives. He is one of our “original”

our children, became our family.

When people would come over to visit we found we had to put Billy in the bedroom, or he would bark viciously and incessantly, and try to bite at their ankles. I laugh to myself thinking of how often Billy intimidated six-foot-tall contractors or repair men!

I have assumed that this behavior is because he is still afraid of most people, and perhaps Billy afraid that if he is nice, some stranger will take him away from the home he loves. We know so little of his past, how many homes he had been through, what losses he may have suffered, that we have just been delighted that he has been as loving to us as he is.

Over the years we went from having a growing pack of our own dogs to becoming a dog rescue, taking in dogs from euthanasia lists and adopting them out to loving “forever” homes. But Billy’s forever home has been here.

We have been noticing over the past months that Billy has spent more and more time resting, sleeping in one of his little kennels…and I just assumed that as a “senior” he chose to stay out of the whirlwind activities of younger playful dogs. But he would still come out to the front yard. He would still bark and howl with the rest…

…until yesterday in the early afternoon, while I was working in the office, when I heard heart-wrenching screams coming from the living room. I ran into the living room and there was Billy surrounded by other dogs. It seemed as though perhaps, I thought, he had gotten into a fight?? Perhaps a larger dog had hurt him?

Jeff came running in from outside and was at my side almost instantaneously . We immediately saw that his ankle was ballooning in size. Billy was still screaming as I picked him up and carried him into the bathroom. He was hysterically trying to bite, but even in terrible pain, he didn’t bite hard.

Billy did not want me to touch him anywhere, particularly not anywhere near his leg. I gave him a pain pill wrapped in cheese and within 20 or so minutes his hysteria waned. Although we still could not touch his leg, he slowly accepted pets and soothing comfort. I called our Benson Vet, but she wasn’t in, although there was an early morning opening. I took it…hoping it was a sprain and the morning would find him walking, or at least limping…

But that was not to be. Morning found him still hobbled, his big eyes questioning why…

At 8:30 in the morning Billy and I, with my trusty companion dog little Ricky, were at Dr. Nancy’s office where X rays were taken.  Yes, his leg was fractured…but it was not due to a fight or a fall. Bone cancer had so thinned the bone that it simply broke.

Dr. Nancy called a veterinary oncologist for a consultation, and in the interim splinted his leg to give some stability and sent us home with more pain medication for hopeful comfort. She feels he may have 6 months, maybe less…


Billy is resting tonight in the quiet of the bathroom, a small heater supplying additional warmth to his tired body. Even with the pain medication he seems sad…it breaks my heart. He lays on a pile of rugs and mats, his leg bandanged and stabilized,a water bowl and some cooked chicken, normally a treat, within easy reach, next to his little crate with it’s ever-open door…

Tomorrow I begin calling specialists, finding out what we can do, how we can do it.

Tomorrow I begin raising money, for testing, for doctors, for, it appears, an amputation which may save him or at least buy him time....

In times like this I think of my mother who died of bone cancer thirty years ago. I think of my dear friends, all too many, sadly long gone before their time. I think of my little four legged companions whose lives I had the honor of sharing, lives lived for too short a time. I recall my beloved feathered friends who should have outlived me…whose early passing always came as a shock and sad surprise….

All of these lives whose eyes had opened windows for

me to enter and know the souls of other sensitive and

and now missed with an empty ache which never

Jeff and I hug one another with sadness in our hearts

and eyes, knowing with the certainty of age that we too

Today Jeff and I acknowledge that the weeks and days

are counting down for Billy…and we want to make sure

another day, another minute… and that as he faces

After much thought, testing and fund-raising, billy had his right front leg amputated by Dr. Walter Merker. We took the removed leg to University of Arizona's Veterinary Diagnostic Laboratory where microscopic pathology was done on the tissues. Sadly billy has the worst kind of cancer: Osteo Sarcoma. We have been advised that without chemotherapy his life expectancy is about 7 months...perhaps a year with. We have opted not to do anything invasive but rather keep him comfortable.

Some exciting news....We took Billy in for a series of X-rays yesterday at our new Veterinarian, Dr. Auburn Heist's office. She took lung (first place Osteo Sarcoma generally metasticizes after leaving the bones) as well as gut and other other views - 5 in all - and found out that nothing can be seen at this time.

Does this mean Billy is cancer free? Probably not, but almost seven months after his surgery, billy is truely beating the odds.

Hold a good thought for our brave little man!

It has been FIVE YEARS and Billy continues to beat ALL odds! Xrays were taken a few months ago and he is showing no signs of the cancer reoccuring or spreading at this time. He is happy, eating, playing and doing so very well!

Thank you all for your help and support...and please continue to hold a good thought for this boy!!