Although the first week was difficult, she was getting around without the damaged leg within a few days. On July 29th the sutures were removed. Adi is delighted to be out of pain for the first time in over half of her lifetime. We could not have helped her without the support of all of you! 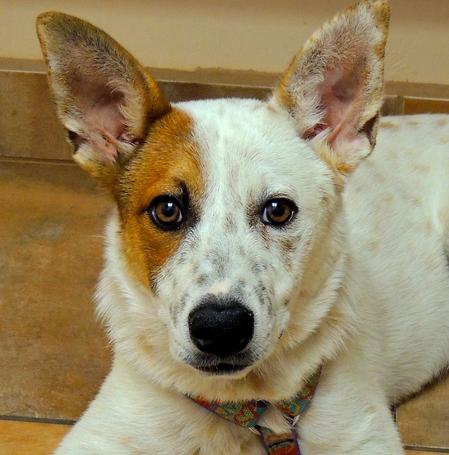 Adi was on Pinal’s county animal shelter’s euthanasia list. Due to major overcrowding at Pinal, there would be two euthanasia days this week, and Adi, an injured 9 month old Red Heeler pup, had less than 24 hours to live.

Thanks to a mini grant from PACC911’s Lulu’s Angel Fund, Jeff and I decided to take in “just one more” at Cochise Canine Rescue, “justifying” the additional dog with the hope that having a human oriented dog with Bina, our timid feral girl, would help in Bina’s assimilation as well as give a chance at life to Adi.

As always, on the way back from Pinal, we stopped at our Vet, Dr. Auburn Heist’s office, Rincon Vista, in Tucson to have Adi examined.

This sweet girl allowed the doctor to poke, prod and manipulate her leg without complaint even though it was obvious that she must be in incredible pain. X-rays were taken and the internal horror exposed. The bone at the knee had disintegrated at least a month ago, probably, Dr. Heist thought, from Valley Fever, but cancer could not be ruled out.

After consultations with several specialists, we all agreed that the non-healing leg would have to be amputated.

An appointment for Adi's surgery was scheduled for Friday July 15th.

We drew Adi’s blood for the Cocci (Valley Fever) test and I delivered the vial to University of Arizona Veterinary Diagnostic Lab afterhours repository yesterday evening. When I called them this morning and explained Adi’s situation, they moved her up to the front of the line and we will know tomorrow or Friday whether she has Valley Fever.  If it isn’t VF it will be far more frightening, but if it is VF, we will immediately begin her on medications to help her body fight this ravaging infection.

We had Adi on three times daily pain medication and she is probably feeling better than she has in many months. We wonder how this young dog could have been through this much suffering without complain and without assistance for so long.

Adi has an amazing disposition. Shy the first night here, by the morning she was running on three legs over to us, wagging her tail, asking for pets and loving. Adi is an amazingly loving baby and the thought that had Cochise Canine Rescue not had the ability to take her in, that she would now be dead, is heartbreaking…

We soon realized that we would need to raise more funds for Adi's surgery and care. In addition to the Lulu's Angel Fund Grant we received two grants, one from the National Anti Vivisectionist Society, who had also helped our animals in the past....and from the Ian Somerhalden Foundation. Individuals generously sent donations as well, and we have been able to give Adi the care she so desperately needed!

Help us help other  dogs like Adi by making a donation in any amount to CCR's Medical Fund today! Thank you in advance!!!