Yassi joined us a year and a half ago. At that time Yassi,

a Navajo Reservation dog, was about 3 years of age. Yassi

means “snow” in Navajo…and she is an almost white dog.

Yassi was on the euthanasia list at the Pinal County animal

facility as she was both blind and had hind-quarter tremors.

When I saw her I contacted the then-director, Kaye and had

a hold put on this little girl.

Yassi needed intensive medical evaluation when we pulled her

from Pinal Animal Control and she was fortunate to become a

the Veterinarians decided that Yassi had survived Distemper as

a pup that had left her with neurological deficits which explained

both the blindness and tremors.

Yassi has done very well here, settling into life with the pack. She is probably a cross between a sheltie and a golden retriever (?) and weighs in at a chubby 40 pounds.

However her blindness progressed and became Glaucoma. Glaucoma causes severe pressure to build up behind the eyes. We suspected this when her eyes became very enlarged and bulged. We took her into see Dr. Auburn Heist to have her eyes tested for Glaucoma and our fears were confirmed.

Yassi needed major surgery – eye enucleation (removal.)  Glaucoma causes major headaches and discomfort at this point and cannot be neglected so we are asked for support in order to have surgery as soon as possible. Since we have been through this procedure recently with another dog, our blind boy Charlie, we know that preliminary recovery from this surgery takes about two to three weeks…with complete healing taking about 6 weeks. We hate having to do this to our sweet little dog but ultimately it will make her more comfortable.

While we raised the funds, we had her on pain medication to keep her comfortable.

We received donations from a number of our donors, and a grant from NAVS (National Anti-Vivisection Society)’s Sanctuary Fund. It enabled us to have Yassi’s surgery done. Within a few weeks it was apparent that she was feeling much better….and we discovered something odd…

(although we had previously felt) a round indentation in her forehead.

It looks like she was either hit in the head with a hammer or shot?

Could this, rather than Distemper, be the cause of Yassi’s

neurological defects? We doubt we will ever be able to find out…

insufficiency could cause seizures as she ages. Having dealt with

a dog with epilepsy, we have placed Yassi in our “special needs”

She is a feisty girl, fitting in well here with both the larger

able-bodied dogs and the smaller and elderly animals. Yassi is a

Yassi is looking for a monthly Sponsor? Could that be YOU? Call us and find out how to have a virtual-adoption of this deserving and loving little girl! 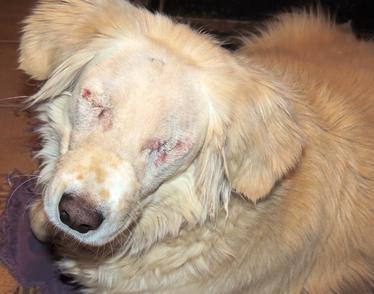 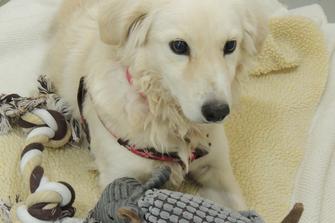