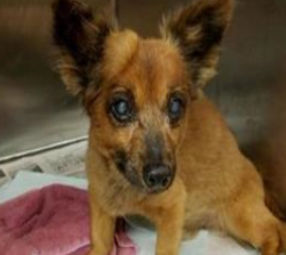 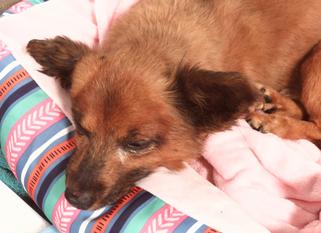 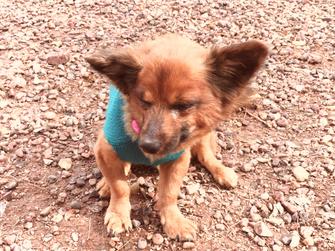 Foxy arrived deaf and blind on December 10th. He is a mostly Pomeranian boy about eleven years of age (a broad guesstimate made by the people at the Maricopa pound. He could be much older based on his infirmaties...or younger based on the condition of his teeth.)

Arriving at Maricopa in early December

As a stray, he had no name when we accepted him, but we began to call him Foxy due to his foxlike appearance.
We are not sure how long Foxy has been deaf or blind. We have no idea about his early life. We are not sure if Foxy's maladies are due to abuse, heredity or accident.

"Once I knew the depth where no hope was, and darkness lay on the face of all things. Then love came and set my soul free. Once I knew only darkness and stillness. Now I know hope and joy."
- Helen Keller, On Optimism (1903)

While the Maricopa pound thought he was diabetic, after several tests, we have come to the realization that he is not. However he has severe neurological issues.Foxy walks in circles, consistently to the left.

Within a day of his arrival, Foxy suddenly had explosive diarrhea. He was immediately seen by our Veterinarian and was started on three medications to stabilize his immediate bowel issues. When Foxy was done with the initial medications, we began to try to address the neurological issues. He was started on an antianxiety medication which he reacted badly to...going from walking in circles to running franticly in circles.

He was switched to several other medications including pain medication and a different antianxiety medication. Sadly, the new antianxiety drug would either knock Foxy out for 18 or more hours or, when awake, he would still consistently pace in circles. Worst of all he began to become anorexic and lost 2 pounds in ten days! After several days on the drugs, Foxy began to cry, whimpering at all hours of the day and night. For two days he didn't eat, going from 4 or more bowls of food daily to a half bowl over a 24-hour period.

Foxy wouldn't take his medications readily so I took him off all medications, believing Foxy might be dying.

I took him back to our Vet, thinking he might have to be euthanized, but she opted to do some additional blood work, including a Valley Fever panel (at no cost to us!) to try to get to the reason for his apparent neurological issues. Valley Fever can manifest in any organ including the brain.

Amazingly, after 48 hours off medications Foxy began to eat again. His pacing slowed down. He stopped crying.

He is back to eating at least 4 bowls of food daily. We experimented with what he likes to eat the best, so we are giving Foxy chicken baby food mixed with rice and cooked shredded chicken. He really loves it. Although his food bill is quite costly, until Foxy is back up in weight we will feed him anything and everything he likes that is healthy to eat!

Helen Keller was viewed as isolated but was very in touch with the outside world. She was able to enjoy music by feeling the beat and she was able to have a strong connection with animals through touch. She was delayed at picking up language, but that did not stop her from having a voice.
-          Wikipedia

It had occurred to me that Foxy is a Hellen Keller dog...a dog in need of communication through touch. Although he gets antsy when held too long, when he has been agitated, either walking in circles excessively or whimpering, holding him has been one thing that calms him down.

Rather than try to get Foxy to relate to us, we need to get to understand his limited set of wants and needs.

When he begins to pace, I have been taking Foxy outside when we have no other dogs outside (except Ira and perhaps one or two mellow, smaller dogs.) He appears to like it when another one of the little dogs comes over and his tail wags.

Foxy wanders the yard, still bearing to the left, sometimes circling around a tree or item he finds outside...but it is obvious that the smells and space and changes in temperature and breezes are things that he enjoys.

It appears as though Foxy is beginning to recognize me...either by my smell, or as with Helen Keller, by the beat of my walk. He sits up when I walk into the room even when laying down and resting. This occurs whether or not I have food, so it cannot be the smell of food. He can't hear me. I am not sure what it is, but it is becoming obvious that he is becoming aware of my presence. Even when outside, he has come and put his head between my legs and stood while I rub his neck.

I must admit it makes me feel warm.

But he has a very long way to go.

Time will tell how well his health issues do. Ironically, we are hoping he has Valley Fever as treatment might help his neurological deficits.

Time will tell whether we can offer him a comfortable life, a quality of life.

And as with Helen Keller, time will determine how well we learn to communicate with one another.

"I feel that in this child (speaking of Helen Keller) I have seen more of the Divine than has been manifest in anyone I ever met before."
-          Alexander Graham Bell

We find divinity in the lives of all the beings we care for. And even with his limitations, Foxy's life is no less sacred.

We can only hope that Foxy continues his small steps of improvement - meaning continuing to eat, continuing to find contentment in life's small things - like touch, being held and interaction with other small dogs.

We don't want him to cry out of fear or loneliness, or pain, as he did last week. We want him to continue to relax and find comfort in rest and sleep.

While life is sacred we do not believe in allowing any animal to suffer.

Please continue to hold a good thought for Foxy and his long term recuperation.

Foxy will never be "normal" but contentment comes in all forms.