Over the next few days Jasmin kept sending me updates with pictures of Iris in her new home.

It does our hearts good to see her settling in and happy with her new "parents" and dog buddies.

She really is the Perfect Dog!

Iris sleeps on the sofa near her new sister Daisy, the elderly Lab. 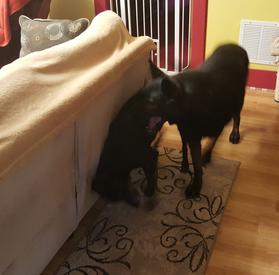 Iris resting with new "dad" Doug at her new home 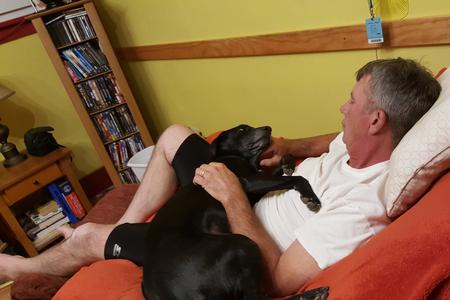 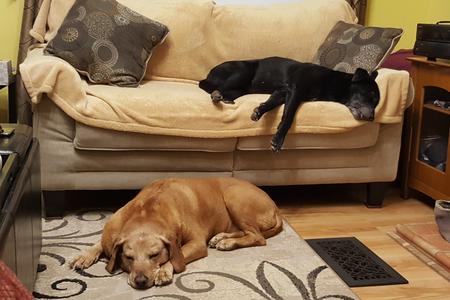 Iris arrived in early October 2015. She was running out of time at the high kill facility. Depressed, another overlooked black lab-type mix, she had given up.

But we realised that she was not as old as she looked and was very sweet and loving. We had brought Charlie the blind boy with us to help pick out a buddy while we went through and recovered from his surgeries. He selected Iris.

As Iris settled in and came out of her depression and shell, we came to see that she was playful and active. The veterinarian agreed with us that she was probably only 4, perhaps 5, years old. A young adult.

Iris became friends with almost every dog here, working her way into the "pack" learning from the other dogs how to behave and what to do.But as Charlie recovered it became apparent that he was most comfortable with us, and not with the other dogs....even though Iris was still the one dog he liked. But it became obvious that Iris could go to a home and soon we put her up to adoption.

When Jasmin called and asked about Iris, I was, as always, somewhat skeptical...wanting to make sure that the dog would be the right match for her household. She and her husband Doug have three other dogs: a 17 year old rat terrier, a 14 year old yellow lab mix and an high-energy 8 year old shepherd (retired from being a working dog due to a knee injury) named Jimi. Jimi, Jasmin explained, became puppy-like once he realized he no longer had to work. The other dogs in the home were older and not up to the sort of active play Jimi desired...and that Iris pursued here. After reviewing the application, I made arrangements to do a home check and have the family meet Iris. I was delighted when I was able to leave Iris with Jasmine....but sad because Iris had become so integrated in our home. Jeff was sad to see her, in particular, go... 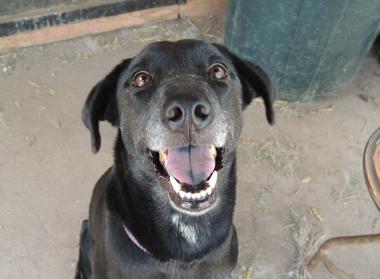 Jimi and Iris play in the livingroom 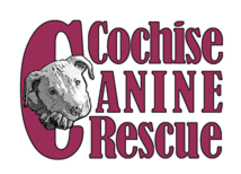