Pit Bulls and Chihuahuas are the two most euthanized dogs at "shelters" across the United States.

PLEASE - Donate today so we can continue to save these, and other, difficult to place dogs!

Donations of any amount make a major difference in what CCR can do! Help Us Help Them!

From Wikipedia: "Gulliver is washed ashore after a shipwreck and finds himself a prisoner of a race of tiny people, less than 6 inches tall, who are inhabitants of the island country of Lilliput. After giving assurances of his good behavior, he is given a residence in Lilliput and becomes a favorite of the court". 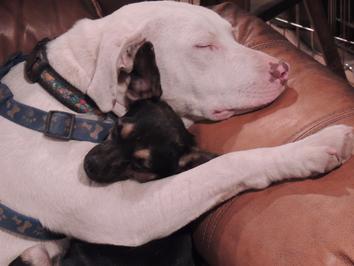 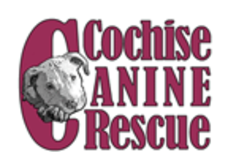 Franny in the Land of Lilliputians

Franny is a Pit-bull dog. She is a hearing-impaired rescue from a nearby high-kill pound, who arrived at about three or four months of age.

When she was first about to arrive, Jeff, who had never had interaction with Pits, was nervous. We have a number of small Chihuahua and Chi-mixes. Would this dog get along with them? Would they be in danger?

I had lived with a Pitty named Rose many years ago and found her to be very smart and loving. Of course, she wasn’t very fond of my as she felt that I was “stealing her man” – my then boyfriend, Billy. But instead of being destructive, she would walk into my studio and piss in front of whatever she knew I was working on at the time…. Like I said: very smart.

So we did a lot of research on line in how to appropriately rear a Pit-pup and the common thread is:

Gentle consistency.
Do not yell or hit: they never forget
Socialize early with lots of animals and people.

Recently we took in a litter of 4-5 week old puppy Chihuahua-Doxie mix pups. Even after a week, they each weigh less than 2 pounds each. Active, curious and funny, these little ones live in a large pen in my studio, but are let out three times a day for a period of exploration while I give them fresh food and clean up their bedding and puppy-pads.

Franny, like all Pits I have read, can climb anything. Whenever I would go into my studio, she would climb the gate separating the other dog area from my studio front yard, and sit at the closed screen door, watching the babies who would yip at her through the screen.

After several days I decided to let her in….

Franny loves the babies! She runs around with them, allows them the chew on her and roils around on the floor with them. She holds them and licks them clean.

Earlier today I turned to see what they were doing and saw 30 pound Franny laying on her back, covered with tiny yipping babies, crawling all over her. I could only think of Gulliver’s travels when he was tied down by the Lilliputians!