suspicions which can neither be proven nor disproved….

Shayna is now, in the third week of January, about 10

weeks old.  She was, I imagine, purchased or adopted

as a Christmas gift for someone’s kids

I imagine that everyone was delighted with this beautiful

family addition. I am sure the kids loved the little pup,

but, as children do, they were careless, leaving a door or

a gate open. And, of course, no one realized the tiny grey

fluff-ball was missing…until too late.

Her owners never looked for her. That much of this tale is

Shayna was hit by a car it is thought, but perhaps she was beaten or brutalized…. We will never know for sure. Nonetheless she was seen hobbling along a road in Eloy and someone called animal control. They picked her up, took her to the pound, and thoughtfully rushed her to a vet once they realized how injured she was. But being a small facility without so much as an onsite veterinary staff, they gave her the prescribed medications – antibiotics for her road rash and pain killers for the mangled leg –  and immediately put the puppy on the “sick list”….the daily list of dogs who will be euthanized for illness, age or injury, if a rescue group does not step up. Sick list dogs, at best, have 48 hours….

I was called by Pinal county’s facility and they wondered whether we might have room for just one more…? Rachel, our sick little pup, had just been euthanized that morning…so when I received the sick list e-mail and I saw Shay’s picture, I knew she was meant to come here. I could not let yet another puppy die without having lived some sort of life.

I was sent to the Veterinary office, which had seen her the day before, given her medications and a set of X-rays. I have worked with numerous animals; set bones, and so went ahead and splinted her leg. She would bound around, “galumphing” Jeff and I call it, and is able to negotiate well on the damaged rear leg. In about 6 weeks the leg should be healed….and we hope she left without a limp, but we know no matter what, she will do well.

Due to the kennel cough (or possibly canine distemper…we never did know for sure)  that we had here, I quarantined baby Shayna in my art studio where she has made friends with Blueberry and Jellybean, my studio mouser cats. Berry in particular likes dogs and enjoyed her company.

I spent much of my day in the studio painting, or outside working in the fenced mural area, and Shay would be with me. I allowed Ricky in as he did not contract the kennel cough and therefore, based on my research should be “non-shedding” and safe. Unfortunately Shayna will be isolated until a week or two after her second inoculation which she would have early in February.

Shay so strongly reminds me of two of my favorite but long gone dogs…a Malamute named Wooly-Bear (who lived with me in the 1970-‘s and has had a motorcycle named after him) and Pup-Pup, a Finnish Lapphund I had adopted after she had been hit by a car and found herself at a Phoenix shelter in a similar euthanasia situation. Pup-pup was with me from 1997 thru 2009…

Whatever Shay’s history, her future we decided was assured…as part of the CCR ever-growing pack.

Shayna in January of 2013, shortly after her arrival 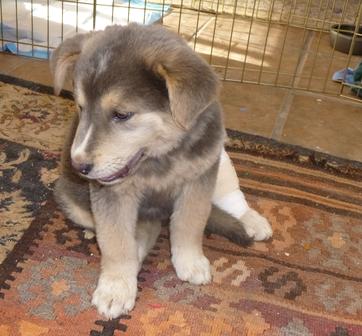