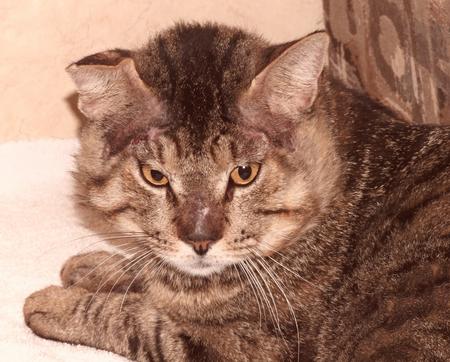 Hank was found in Phoenix, wandering alone. He was very sick, running a fever. It was obvious he had been attacked, probably by a large dog, and had an abscess on his face, another under his chin, two broken teeth, and a torn ear with infection.

The finder took him to Arizona Humane Society, where they began caring for his infections and neutered him.

When Hank ran out of time, Cochise Canine Rescue agreed to take him in late May.  Hank spent several days at our Vet's office where he had oral surgery to remove the two painful, broken teeth.

When he had his presurgical bloodwork done, we discovered that he is FIV positive. At first we thought we could not bring him here, but after speaking to two friends who each run Cat rescues, we learned that the chances of our senior girls getting FIV from him was slim to nil. In fact, Susan, who runs Hope Rescue here in southern AZ told me that in all the years she has done cat rescue (many!) not a single cat had caught FIV from another kitty at her rescue.

I did further research on line and discovered that it takes a very deep and serious bite to transmit the FIV virus (although kittens can get it from their moms.) Generally it is transmitted by a deep bite when two unneutered tom cats are fighting...FIV does not kill cats...it is secondary infections that can kill both cats. Now th Hank has become an "indoor kitty" he should have a longer life!

Hank has been living with our two girls for a week now and is getting along very well with them. He eats well and is settling in.

We suspect Hank has had a very hard life and has spent a long time on his own. He still is very shy, but is allolwing me to pet him more and more. It is becoming apparent that he likes his new life with us and should have a content long life here.