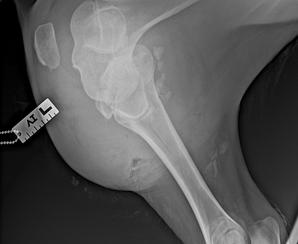 Taking in senior and “special needs” animals creates the awareness that we are often providing relatively short term hospice care. It is always heartbreaking. It is always emotionally devastating and difficult. But with elderly animals, animals with long term chronic illness, we come to accept the inevitable and fight to keep their lives comfortable for as long as humanly and humanely possible.

We certainly did not expect to be providing hospice care for a beautiful baby heifer.

When we took Sweetie into Cochise Canine’s farm animal program on March 28th we had high hopes for her… Although the rear left leg was terribly infected due to being run over by a Quad (a sort of off-road mini jeep) at age 2 months and medically neglected, we hoped to get rid of the systemic infection and enable her to have a somewhat normal life.

I stopped off at Adobe Veterinary Center in Tucson on the way home with the calf. They took X rays, did blood work and cultured the wound. I was sent home with antibiotics, pain medication, told to flush the wound daily with a dilution of Betadine and was given an antibiotic salve to insert into the wound.

We knew the leg had so much scar tissue and the joint so severely damaged, that it would never bend, but after being put on antibiotics and anti-inflammatory pain medications, we believed she could recover enough to have a manageable life.

I had been told by the veterinarian who saw Sweetie that a three-legged cow cannot survive, but if the rear leg could be used to balance her weight, she would be fine.

We didn’t understand – had not been told -  that if her rear-leg did not grow due to damage to her growth plate, if it didn’t keep up with the right leg, it would destroy her hips in short order….

Likewise, no one had mentioned the possibility of the systemic infections moving into her bones…. a malady that cannot be successfully treated unless caught immediately. It is deadly in bovines….

​​For her first ten days with us, Sweetie, although we needed to help her up in the mornings using a blanket under her hips to raise her up…was on her feet from 12 hours a day to at one time over 20 hours, roaming her ¼ acre, exploring. She ate well and was gaining weight and growing taller. She seemed content and was doing better and better. The initial wound was healing, closing, granulating in.

But soon we saw her dragging the rear left leg. It was not growing.

And soon thereafter her hips were beginning to creak. We were aware and frightened that something was not right….

On April 17th, she would only stand 4 hours at a time. She would get up again after a few hours but, although we refused to accept it, she was getting weaker.

On Wednesday the 18th, three weeks to the day that she had come to live with us, she only stood for several hours, seemed weak. Sweetie was still eating and drinking well and did not appear depressed.

On the 17th I began spending all my time on line looking for “solutions” … a wheelchair, I decided might be the answer.

I called and wrote each of the major custom dog-wheelchair manufacturers. Most told me that their materials – usually an aluminum frame - could not hold an animal of 185 pounds.

One company got back to me and told me they could make one which would hold her up to 230 pounds or so. I thought by then she might have healed and once again be able to stand.

However, when one of the owners of one of the top three chair companies called me, she and I spoke a long time and she educated me regarding the benefits (short term, or for small lightweight animals) and the down-side to wheelchairs for large animals.  I learned that heavy animals get what is called “skin shear” where the skin slides off the underlying tissues, from their weight being suspended. Skin shear causes painful secondary infections. It is the reason that even mini-horses, alpacas and larger dogs have short life-expectancies if placed long term in a cart.

Then I was told about livestock slings…. but they too have similar issues and are appropriate for 2-3 weeks while an animal is recovering from surgery or short term illness.

Unless we could get Sweetie up and mobile quickly, none of these options were viable.


By the next day, April 19th, Sweetie could not hold herself up any longer. She tried, but, shaking with pain, she would collapse.

When she went down we noticed pus coming out of her right front leg.

The infection had spread.


I called the Vet at Adobe who had initially seen her, wanting to get more antibiotics. However, after several hours when they finally called back, I was told they would not help me unless I brought Sweetie back to them.  Given her additional weight and inability to even walk as far as to the van, we knew bringing her back to Tucson was an impossibility.

I contacted a local mobile Vet, Bonnie Thwaite, who I had used for an injured goat and for the donkeys several years ago. I had not used her for Sweetie originally as I wanted a hospital setting if she would have needed surgery….

Bonnie told me to come down and get antibiotics to get her started on. She could not get over to see Sweetie for several days when she would have a break in her schedule.

I gave Sweetie the injection of strong antibiotics. I started her on a high dosage of Banamine, the anti-inflammatory with pain relieving properties. Adobe had told me not to give her any more Banamine due to long term kidney and other damage, but Bonnie said with a downed cow, pain relief was essential…that Sweetie had to get up, or she would die.

When Jeff went into town a few days ago, we purchased a one-ton engine hoist as a “just in case” we could use it, but did not unpack or set it up, waiting for the Vet, Bonnie, to come out.

If her leg was in fact not growing and/or the infection had spread to her bones, we did not have any realistic options for her long term comfort.


Jeff and I were trying to get her on her feet several times a day to give her body some needed circulation and insure her tendons didn’t contract and shrink. But even with Jeff holding her up, yesterday April 21st her left legs were trembling from pain and she started to fall over to the right. Jeff lowered her as gently as possible.

I was flushing the new wound daily…when I noticed that the old wound on the rear leg, which had been closing up, apparently granulating in from the inside, had opened up again yesterday.

I flushed it…and a large quantity of pus came out.

The original infection in her rear leg had resurfaced.


I called Bonnie back. We talked a while and ultimately she stated it simply was not sounding good for Sweetie. Bonnie suspected that osteomyelitis, infection of the bones, had spread from the infected tissues to the bones through the growth plate. …or that the growth plate itself had been damaged due to the initial injury or the untreated infection

Jeff and I spent several days fighting depression, angry at the lack of caring by humans which brought things to this sad point. We discussed the reality of Sweetie’s situation, and although we agreed that we did not want her to suffer if there were no options, but if there was any possibility of even a few months of comfortable life, we would fight for Sweetie’s life.

At 1:30 PM on Sunday April 22nd, Bonnie drove up. I showed her the X-rays that had been taken at Adobe three weeks earlier.

She immediately pointed out growth-plate damage in the rear leg. It was obvious that this was the overriding issue. I was angered that Adobe hadn’t pointed this out and discussed what Sweetie’s situation really was.

Bonnie said the infection was the least of the issues…that the infection could potentially have been treated…but Sweetie’s leg was short on the left side. It put undue strain on her hips, hence the grinding and clicking…and put too much unnatural weight on the front legs.

There was no coming back.

Bonnie further explained that Sweetie’s tendons were already shrinking and the muscles were slowly breaking down, pouring toxins into her system…and that soon her kidneys would fail.


Knowing the nightmare of keeping a dying animal alive too long and causing them unnecessary pain, when Bonnie told us things would not get better, only worse and more painful for the sweet little heifer…we agreed to euthanize Sweetie to keep her from any further suffering.

Jeff and I sat with Sweetie as she was sedated. She looked into our eyes and licked Jeff’s face and beard.  We stroked her as she ultimately was sent to the dark and endless unknown where pain and suffering no longer exists.

Jeff is infuriated that humans were so careless with this gentle soul that she was injured in an avoidable “accident” in the first place.

I am infuriated as well by the lack of proper follow-up medical care Sweetie should have received.

We are frustrated by the fact that ranchers and auctioneers and people making money on the backs and souls of these beautiful animals see only financial gain and that financial loss is unacceptable to them.  The suffering of the millions of animals that pass through the “system” is unimportant, if ever even considered.

None the less, we find satisfaction in knowing that Sweetie was not frightened and tortured at a slaughterhouse as most “downed” cows are. She was loved on during her last minutes.

For slightly over three weeks of her all-too-short life Sweetie was cared for by people who were concerned about her well-being.

Jeff and I are heartbroken by this loss, our hearts aching. We will miss Sweetie…her sweet face and kind nature always.

We are burying her in our side yard, where we can see her grave from our office, burying her with hay and sweet grain for her long journey. 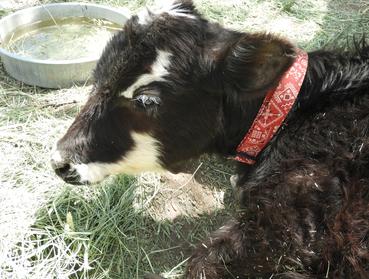 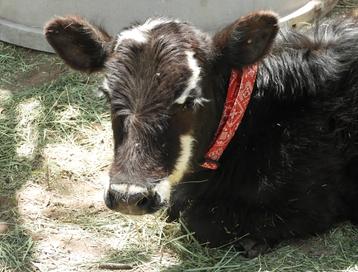 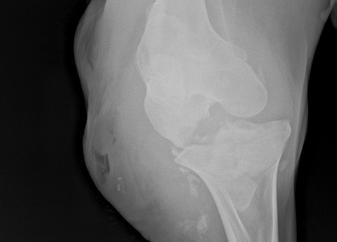