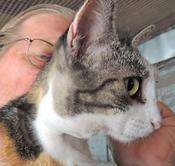 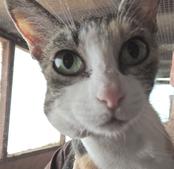 While Cochise Canine is predominantly a dog rescue as you know, we DO take in kitties and farmed animals from time to time.

Holly needs major surgery to save her life. Several weeks ago she began developing what we thought was an abscess or infected tooth, but when she went to the vet it was found to be far more serious. She is suspecting of having a form of lymphoma.

Holly, now nine years of age but still the size of a 6 month old kitty, is still extremely active and spry, eating well at this time even with the large swelling on her jaw.

Holly showing the hard, swollen mass on her jaw.

Holly's history: She was found hiding in a bale of hay a number of years ago, two days after Christmas, hence her name: Holly. Holly, who is a lover as well as a great mouser, ended up becoming one of the favorite long term animals at CCR.

When Holly went to the Veterinary hospital a few days after noticing the growing swelling, our Vet did a "needle aspirate" trying to pull cells which were sent to the laboratory, but the result was less than definitive. Holly was placed on antibiotics to insure there is not secondary infection, but while there is no infection apparent, the very hard growth continues to
slowly grow.

We were given two options to find out what is wrong with Holly: Do a "punch biopsy" which could pull more tissue and potentially find out what type, if any, cancer she has....or go in and remove the entire lymph node and examine the entire growth.

In speaking with the head of the labs we use, it was explained that the punch biopsy often misses the cancerous cells and is not 100% definitive. And if it is cancerous (which it appears to be...and it is still growing) Holly will still need the entire mass removed. While a full removal of the tumor/lymph node has risks (lots of nerves and blood vessels) it is the only thing that will define the cancer Holly has and should be done sooner than later.

Even with our discounted medical costs, Cochise Canine Rescue has spent over $400 in the past few weeks on medical care in an attempt to find out what is ailing this sweet little girl.
In order to perform this delicate surgery we need to raise over $600. more for surgery and medications.
Won't you help us provide the urgent care Holly needs?

​Sad Update: On September 11, 2017 our sweet little Holly passed away from the complications of cancer. She lives in our hearts and will be missed.

Help Us Save Holly the Kitty!