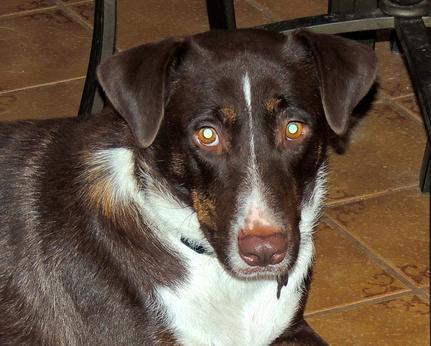 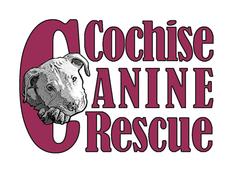 A Year and a Half With Bina

Bina arrived at Cochise Canine during midsummer 2016. She was estimated to be an 18 month old, brown and white, nameless, skinny, terrified, feral dog who had been trapped in a field where she had been living by the Pinal pound. When she was brought into Pinal’s shelter, it was apparent to them that she had been nursing, but, I was told later, her pups were never found.

I cannot imagine the fear she felt….in a loud echoing concrete and metal building, surrounded by the cacophony of over a hundred barking, crying and baying dogs. She must have feared not just for herself, but for her puppies, now lost and starving somewhere in the great wilderness of life.

Within a few weeks, she ran out of time, the euphemism for she was facing death by lethal injection for the crime of being hard to place in an overcrowded municipal shelter. It had become obvious that she was really not adoptable and after promoting her, when no other rescues had stepped up, we took her in. We had just lost our Charlie, our big blind boy…and had room in our hearts and home for this beautiful, wild and untrusting dog.

I named her Bina after one of my father’s sisters who died in the European Holocaust. It is Hebrew for “understanding.”

Bina has three feet – her right hind foot had either been brutally cut off by a sadist, or perhaps caught in a trap. But our Veterinarian stated upon examination that the foot had never been surgically removed by a Vet.

We quarantined her on our enclosed back porch, and after a few days, let Bina out into a fenced side yard away from the other dogs.  No one had even gotten out of the yard…. not even much taller, more physically sound dogs…but within minutes, Bina managed to climb the fence and had disappeared. In addition to her immediate disappearance, in order to get off our property she had to climb at least one other fence.

Jeff kept going out and looking for her…the first day he saw Bina at a distance but when he called to her she turned and ran away.

When he was out looking, I sent out an e-message to everyone in our community as well as printed out and put up posters with her picture and our phone number. We explained that she was fearful and not to try to catch her…just to let us know where she had been seen.

Soon we began to hear of sightings. Jeff and I borrowed a humane trap from a friend who runs the closest town’s shelter.

On the second day Jeff saw her again at the same place that she would be seen on the third day by one of ours neighbors. But she was at distance and ran off.

Our neighbor Lisa called telling us exactly where Bina had been seen late on the third morning. We put out the trap at that location in the early afternoon, just off the dirt road running through our rural community, loaded with fragrant and enticing cooked hamburger and a bowl of water.

A few hours later, shortly before dusk, when Jeff went out to check the trap, she was in the trap busily eating. With the now even skinnier girl safely enclosed in the trap, Jeff quickly returned home to get me. We both lifted the large trap loaded with an even more distrusting Bina into our van and drove the 5-minutes home.

She had been found across from a large field with horses. Bina is a smart and wily dog. In the field there was a big watering trough for the horses where she had most likely found water to drink. There also were shrubs and trees surrounding the field which provided her with shelter and shade.  As an intelligent feral animal who had to survive on her own for most of her life, she obviously had known how to find water for survival and as much food as possible. The field she found helped to keep her alive during those long days in the summer’s heat.

We brought Bina back to the back porch, but she would not be given access to the side run. She had a cooler on the porch, as well as a comfortable bed which Jeff had to pick her up onto as she didn’t understand what a bed was. Although we would like to believe she was content to be safe and fed, it didn’t always appear to be so.

For the next several weeks we were afraid to let Bina outside. We put her bedding and fed her at one side of the porch. Since the enclosed back porch used to be a patio, it has drains in the floor… we would pick up her “business” and hose down the area a few times a day.

Jeff was spending a lot of time with her, trying to get her to stop thinking we were about to harm her. Within the first month he was able to pet her and she began responding. At that time however she still looked at me as though I was about to do harm, even though I was the one who brought her the home-cooked meals.

After a short while had elapsed, I heard about another dog at the same pound whose time had also run out. The Cattle dog who we named Adi (“Jewel”) was about 8 months of age. She very human bonded and sweet, but had a severely broken and neglected leg needing amputation. We put her with Bina hoping that when she saw the positive interaction between Jeff, Adi and myself it would begin to enforce an understanding that we meant Bina no harm.

The two girls became fast friends, resting together…it was a good call for both dogs. But while Adi was delighted to see us, Bina continued to stare at us with fear and mistrust.

As Adi healed, both girls were moved into the house, but Bina would not eat around the other dogs. She also refused to eat any type of dog food so for the first months I made her cooked hamburger and rice, eventually adding more and more kibble. She was odd about eating around anyone for the longest time: if anyone, dog or human, was seen during her meal she would stop eating and leave her food until she was alone again and secure. So that she would eat, for the first few weeks that Bina was in the house, Jeff would pick up the 40-pound girl and carry her back out to the porch.

A month after she had been recaptured Jeff began introducing Bina and Adi to the house dogs, and began walking with Bina, encouraging her to go potty outdoors. Soon she had moved into the house, but still was fed outdoors as she would eat much more slowly than the other dogs and was getting cooked food which the others wanted.

Within another month, Jeff was able to let her outside but he would keep an eye on her.

Soon thereafter we felt comfortable enough that she wouldn’t take off to allow her outside with the other dogs. However, on two occasions, both times when strangers, workmen, were on the property and she saw them, she jumped the fence and disappeared into the dense overgrowth of the neighboring property. But both times she came back, jumping back over the fences, once the offending strangers had left.

She now knew where she lives.

On one terrifying occasion about a year ago when a stranger came over and was outside our inner fencing, talking with Jeff, Bina came to the fence as did some other dogs. But when the other dogs got excited and riled up, and started knocking one another about, she ended up being severely injured, as she is easily knocked over which some of the other dogs see as weakness and an excuse to attack.

We are now extremely careful when strangers come over, and keep her in the house. She is terrified of anything and anyone she doesn’t know…running when I sweep and mop or when Jeff vacuums. But she is comfortable living here now and has finally seemed to work out her place in the doggy hierarchy.

Over the past months we have debated what type of dog she is. As she has filled out and become healthy we have settled on Bina probably being a Chocolate Lab crossed with a German Shorthaired Pointer. Size, coloration and shape seem correct. But DNA is all that will ever tell us for sure…

After a year and a half she still prefers to eat on her own, so we feed her after everyone else, but she no longer runs if Jeff or I come in while she is eating…. She simply lifts her head and waits until we back away. She is also eagerly eating dog food these days.

Bina has become amazingly bonded to Jeff…and he with her. She follows him around, his shadow, wherever he goes. If he is outside the fence, she sits at the gate and waits for him. When she sees him her face breaks into a big smile!

It has taken some time, but Bina has come to trust and like me as well, but not quite as deeply as she loves Jeff. In just the past few weeks she comes over to me and nudges me or paws me for affection.  She also is delighted to take treats from either of us, gently nosing her way through the ever-present hoard of treat-seeking dogs. Bina is and will always be a “Daddy’s girl” but she now happily comes to either of us for treats, love and petting. These days when other dogs are getting loving, Bina is always there wanting affection as well.

Bina spends a lot of time in the living room, lounging around. When we look at her, her now normal expression is a big happy smile on her face. At night she sleeps on her memory foam bed next to our bed. She has come so far!

There are still days where she shows what to us appears to be irrational fear… however since we have no idea of the horrors and brutality she may have suffered before coming here, we accept her as she is, knowing that over time her fears will continue to lessen

Bina has been a major project, but overall she has done amazingly well, and has become a beautiful, healthy, mostly happy and intensely loving dog. Every moment invested in her care has been worth the time 100 times over!