Help CCR help dogs like Bodhi by contributing today to our

January 6th was a frightening day. That afternoon our 13-14 year old White Shepherd, Bodhi, was attacked by his two house mates. The three dogs share the laundry room and have a fenced 1/3 acre to themselves accessible by their doggy door. The three had lived together peacefully for 5 years, since Bodhi's girlfriend died. The other two, Opal age 8 and Jasper, her son, (a dog with a myriad of medical issues) who is now six, reacted after our hay-provider came by. The delivery created a lot of barking and acting out...and for the first time ever, the two younger dogs tore into the elder.

That evening we took him into Tucson to the Southern Arizona Veterinary Specialty and Emergency Center where he was cared for. He was sedated, cleaned up and sutured. Bodhi is on a half dozen medications including two strong antibiotics and pain and anti inflammatory medications for a total of ten days. They did a great job on him!  Bo is getting better every day and we hope he will continue to recover rapidly.

Cochise Canine dipped into our dwindling Medical Fund and spent almost $1200 at the ER within a few hours. We need to recoup as much of these funds as possible to help with the next emergency which arises...whether an incoming dog or an elderly dog in residence. We have several dogs with crucial surgeries coming up and there is always that unknown...
In the past week we have received $500 directly for Bodhi's reimbursement. We thank all those who have contributed and ask anyone interested to please help Bodhi today....

​We wonder whether Bodhi was attacked due to age and weakness. Of course we now have Bodhi separated from the other two dogs.We have created a temporary hospital area and have a separate outdoor area for him to pee and poop in.

By the end of January, once Bodhi is well enough to have free access to the outdoors, we will be finished creating a personal space for the older boy. We are clearing out a portion of the enclosed back porch previously used for storage for Bodhi's private use. Additionally we will divide up the yard previously shared with the two other dogs to create a large area for him to run safely. We have ordered a new dog door to insert in an outside wall and will be picking up additional wire and T-posts for the project.

While Bodhi was at the ER we did blood work on him and were delighted to discover that his blood work is perfect, surprising for a boy his age.

Bodhi's history: Bodhi was approximately a year of age when we took him in. He had Canine Influenza when we brought him from Pima Animal Control (Tucson) almost 13 years ago. He was so ill that he had to be carried out by two people and even with extreme medical intervention, almost died.

Bodhi has been perfectly healthy since then. He had a girlfriend, Tara, a feral white Shepherd mix we also took from Pima, and they lived together for many years When she died 5 years ago I put him with Opal and Jasper. And things were perfect until this..

​To learn more about Bodhi, ready our story on Bohdi and Monsoons! 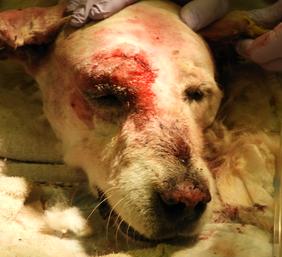 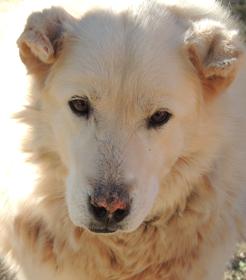