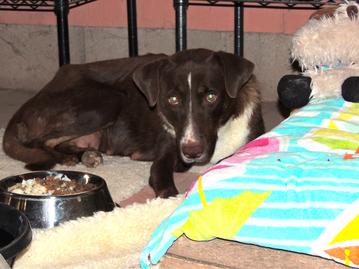 The last six weeks have been fraught with pain and sorrow…and intervening moments of extreme joy and happiness.

Such is the world we in rescue inhabit.

On May 16th I had to euthanize my beloved wolf-dog, my companion of 14 years, my Chick. Obtained during a major rescue of wolves and wolf dogs in, of all places, the tiny community of Whitefish Montana, Chick came to Southern Arizona at the age of 7 months. An unusually intelligent and intense being, Chick was a truly high content wolf who for all the world would have looked like a black on black wolf were it not for her one 1/3rd blue eye. She came and stayed with me in sanctuary, becoming one of my animal allies, due to most locales making wolf dogs illegal. To the veterinarians we saw, she was just an unusual “huskie mix.”

Over the past few years Chick’s beautiful dark fur became more grizzled with grey, her movements more exact and slow as arthritis and weakness overtook this once alpha female.

I knew her time was short, but when, on Sunday May 15th, she came into the house crying in pain, I was not ready to let go of her. But because I love her, because it is right, because I will not allow any living being to suffer needlessly, on Monday morning I drove with her to our veterinarian in Tucson and gently, lovingly, laid her to rest.

I left the Vet’s office and nearly got into two car accidents driving home. I was bereft, confused, inconsolable.  I was shocked by the incredible sense of loss, the heart ache, the hole in my life left by her passing.

During this past year we have lost a number of dogs.  Koda, Chick’s best friend for the past 10 or 12 years left us on July 4 2015. Carmen our 8 year old Chihuahua finally lost her valiant battle with renal failure in December 2015, outlasting medical expectations and predictions by a year.

Although Jeff and I, in our mid-sixty’s, have sworn never to get a pup, discussing our fears for the animals should anything happen to either of us and willing ourselves to outlive our surprisingly aging population of animals, within a month an 8 week old beautiful Cattle dog Aussie mix named Sohvi came into our lives. Her existence does not fill the hole left by our beloved animals who have passed. She is not a replacement for any or all of them, but her innocence and intelligent curiosity brings us laughter and giggles at a time otherwise painful. Watching her grow, observing her delightful interaction with the other animals here, adds light to our lives…

Last Friday June 17th I took Charlie, the blind dog who has been with us for 6 or 8 months to the vet to have a non-healing wound looked at. We anticipated it being minor surgery, debridement, perhaps a tube and a different round of antibiotics. But Charlie was terminally ill, with wounds appearing throughout his body and liquid filled tumors cropping up under his dense fur. The wounds, I was told, would not heal. His blood work looked bad. There was no way to make him comfortable. Jeff and I decided, as we sobbed to one another on the phone, it was time.

Charlie did not go easily. I sat with him an hour, his debrided and cleaned out wound on his shoulder had gone from 1” to 3” in diameter and deep enough to stick a finger in. It was draining blood and pus down his side, yet he took love, pets and biscuits as I said my good byes and awaited the vet. He fought his sedative. He knew. He did not want to go. He wanted the love he had discovered most recently. He wanted a life. I sat weeping, mascara and salt running down my face. I could not give him what both he and I wanted. I was to become yet another human who had let him down.

At age 7 he had a difficult and neglected life, and was chained up outside in Queen Creek as he went blind, alone and in pain from glaucoma. When he escaped, dragging his 20 pound chain behind him in heavy traffic, he went to a cold pound and was scheduled for euthanasia when we took him in.

The glaucoma had created so much pressure in his head that he was not only blind but going deaf. He was in pain yet sweet and loving, craving affection. Shortly after arriving, he had his eyes removed in what normally is a relatively easy surgery and healing, but the infection had been allowed to fester for so long that healing took several weeks longer than normal.

Shortly after his surgery, he got into a fight with several of our other dogs, losing badly, and once again had surgery to close his wounds.

The next 5 or 6 months were better, loving, happier for him, perhaps the happiest in his relatively short life….until June 17th when it all came to an end.

Again the pain of loss, of personal guilt in not giving this wonderful soul the life he deserved, was overwhelming. My body hurt from the loss. I could not think, I could not work. I wanted to sleep.


Before Charlie’s passing I had noticed a dog, a two year old Aussie mix, who was to be euthanized on Friday June 24th. She was fearful, they said, and had a badly injured foot, as well as missing part of her rear foot which had healed sometime in the past.

I promoted her, trying to find a rescue to take her. But none could.

Jeff, also bereft by Charlie’s passing, suggested, knowing I wanted to, that I bring her home.

Bina arrived on Wednesday June 22nd. She had to be carried as it appeared that she had difficulty walking. She looked like an Auschwitz survivor, gaunt, underweight, fearful.

Before coming home Bina went to the veterinarian’s office to have her wounds treated and have bloodwork run. It was discovered that this year or perhaps one and a half year old youngster had recently had pups. Her life had not been one of luxury or comfort…

We set her up on our enclosed back porch, with a large soft bed and purchased a cooler to keep her comfortable. We gave her a stuffed toy, but she appeared not to understand its meaning. We fed her four times a day, small meals with puppy kibble and gravy and rice and cooked chicken. We brought her biscuits and treats.

She would not eat while we were present.

She allowed us to touch her but was mostly non-reactive, laying still on the bed or nearby Sherpa pads. She never growled. She never bared her teeth. She passively watched us with alert yet distant eyes.

We wondered what she had endured to so distrust humans.

We were to discover that rather than abused she is, in all likelihood, totally feral.

She would eat when alone, unwatched. She would do her business, but we never saw her move. We assumed she was in such a weakened state that she could only rest.

After 36 hours we opened the door leading from the porch to the fenced side yard. Many large dogs had used this area. We felt it would be secure, safe and a bit of outdoors for her to enjoy.

But at 6 AM this morning, while Jeff fed other animals and shortly before I was to bring her the morning meal, Bina jumped a 5 foot fence and gate, ran through the property, jumping neighbor’s fences and disappeared.

We missed her by minutes and I tracked her following my dogs’ visual cues as they had seen her bolt. I heard neighboring dogs barking as she passed. I followed the sounds but could not find her.

I made calls to neighbors, sent emails with her picture, printed fliers. It was now 7 AM

Jeff had taken his car to search for her. Finally he saw Bina 300 feet away at the mouth of a large nearby wash. He drove up the wash a short distance, stopped the car and got out. She stood, tall and regal, head high, looked at him for a long moment and when he slowly moved toward her, she turned and ran like the wind, disappearing from view in the thickets and behind the boulders, disappearing before Jeff could see her again.

We brought a bucket of water to the place he had last seen her.

A neighbor spent a couple of hours hiking along the river that the wash empties into, but never saw her.

Again my soul aches, I feel the guilt and the loss. It drizzled lightly early in the evening. I hoped that Bina had found a safe place to go to ground and stay dry as the heavens rained down their tears.

Where we live is remote. The desert is huge and uncompromising, human habitation often a mile or more apart. It is a dangerous place for all who inhabit it and the wild life is at least as intelligent and cunning as this lost girl.

As night fell Jeff again went out looking for Bina. The water he left earlier in the day appeared not to have been touched by anyone. He looked for the glow of eyes in the darkness, but saw no one other than a small pack of coyotes in the distance. The sound of insects and night birds filled the darkness with the white noise of silence.

I can only hope Bina finds a nearby ranch where there will be water and someone who may choose to put food out for this sweet lost soul.

Update: It took four days, but with the help of neighbors who were on the lookout, especially Lisa, and borrowing a humane trap from Paul at the Benson animal control shelter, we were able to bring Bina home One June 28th . She had lost more weight and was quite weak but content to be home again and eating.

On July 5th we went back to the Pinal pound and, thanks in part to a Lulu’s Angel Fund mini-grant, brought Adi, a 9 month old pup on the euthanasia list due to what we learned was a badly broken leg, home. Adi, whose leg is non-healing, may have Valley Fever in her bone…or she might have cancer. On Friday July 15th we will have an amputation performed and will learn more. More about Adi will follow.

To date we have received one Lulu’s Angel Fund grant for Bina, another for Adi, as well as a smaller grant from NAVS and another from ISF. Our donors have been helping as well and without all this help, could not be saving both girls…

Best of all, Adi and Bina are becoming fast friends. 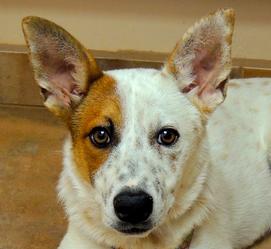 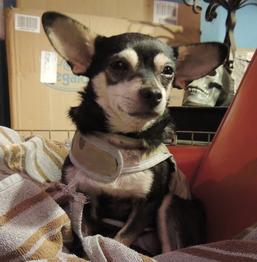 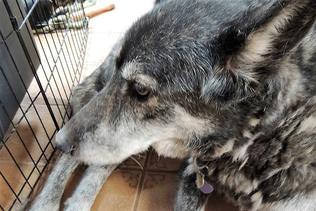 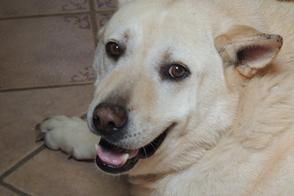 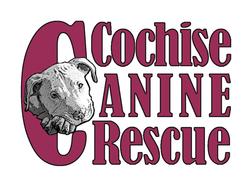 Love and Loss in the World of Rescue 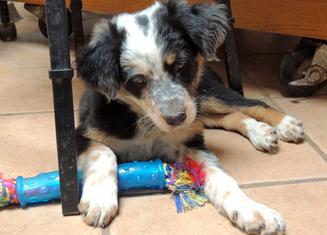 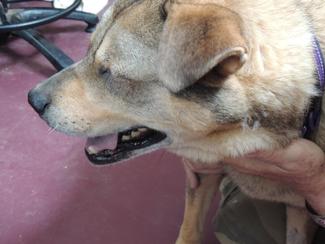