Enable CCR to continue taking in "Other Critters" in need! Please donate today 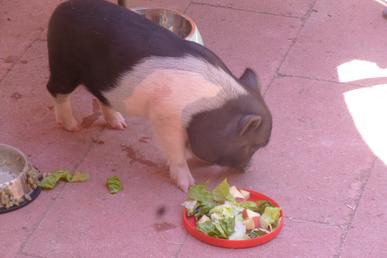 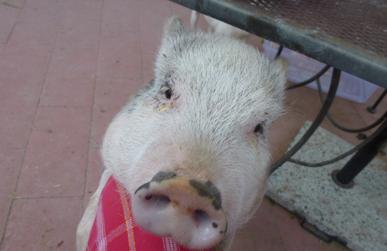 In the Spring of 2013, an email crossed my desk. The woman was writing and asking for help placing an abandoned potbelly pig. This 6-month-old boy had been found in South Mountain, outside Phoenix, running in a wash (a dry, seasonal creek-bed for those not from Arizona) and the community had come together, spent two weeks trying to capture the wayward little pig.  Once hungry enough and trapped, he was put up in a neighbors’ home where he often terrorizing the home owner’s pet dogs

After two more weeks of searching, it became apparent that no one was looking for the pig. Word went out…and we answered….

A few days later we drove up to Phoenix, to the home where the 40 pound white piglet was in foster care. After a half an hour of chasing the boy through the large yard, under and around bushes, we were able to fool him into getting into a large dog crate. We drove the three hours home.

It was late night, so we put Boarus, as we

would call him, and his crate, into what we

thought was a nice, secure, fenced area in

front of the house. The next day the dogs

discovered Boarus…. and after what I

thought was a careful introduction, we

thought all would be all right.

On the third day Jeff and I had shopping to

do and left Boarus in the fenced area, and

the dogs outdoors (as we always did.)

Suddenly, while we were at Wal-Mart in

Benson my heart stopped and I told Jeff

we had to go home immediately.

Something, I sensed, was not right.

Of course he thought I was being foolish, but when we got home we found disaster….

The dogs had torn down the fencing surrounding Boarus’ area. After hysterically searching we found the injured pig hiding under a wood pie, while the over-amped dogs were still hunting for him.

I began calling after-hours emergency vets and found out most emergency veterinary services do not work on pigs. Fortunately Adobe Veterinary in northeast Tucson does…they have after hour’s emergency services for all sorts of farmed animals…that is important to know!

Boarus was shocky, but would pull through. The wounds were not at deep or as serious as we had thought before cleaning the blood off him. The veterinarian washed him, cleaned his wounds, gave him pain meds and antibiotics…and around dawn, I was given silver sulfadine cream to take home and treat his wound with. For the next several weeks I would goop the heavy while antibiotic cream onto his slowly healing bruised skin.

Boarus moved onto our enclosed back patio while healing. My guilt was overwhelming…my ignorance had almost killed this little pig who had already gone through so much in his short life!

So, I decided to make it up to him by getting him a companion.

I looked on Craigslist.

Sadly there are all too many potbelly pigs out there. People get them as cute little babies, keep them isolated and unsocialized, feed them hog food or dog food rather than the specifically designed and slightly more costly pot belly feed, until they become unmanageably large and obese. Then, not knowing what to do with them, people try to get their pet into a sanctuary like Ironwood Pig Sanctuary in Marana (a non-profit, home to over 600 pigs.) When sanctuaries and rescues can’t help, they put them on Craigslist. Unable to take on the necessities of an older a 200-pound pig, I was delighted to find a man with a litter of tiny, four week old, ten pound black and white piglets. I hopped into the truck, drove back to the far northwest side of the Phoenix area four hours away, and brought home little Natasha. Now there were two… Boarus and Natasha….

We set them up on our large, enclosed back

patio where they could live in safety until we

were able to move animals around and give

the pigs the safe side yard next to our home.

They moved to the outside side yard during the

Natasha is 6 months. They sleep together in

on a pile of old blankets, protected from winter

wind by a heavy towel tacked up to cover the

opening. They are fed in two large bowls twice

a day. They eat shredded lettuce, topped with

a handful of Cheerios or dry bread and each

bowl is topped with exactly one cup of Mazuri’s “Active Adult” Pot Belly food. Boarus is twice as big as Natasha, perhaps 75 or 80 pounds now, while Tash is up to about 40…

But here is when things get interesting…Boarus has taken to rolling large rocks around the Dogloo to decorate the home for his little sow. He nudges 6 to 10 inch rocks he has found around the yard and has encircled the front and part of the back with equally spaced apart “boulders”.

I wrote my friends at Ironwood Pig Sanctuary in Marana, just north of Tucson, and they were not sure about this behavior… although I did find out that pigs will stack branches to create a windbreak if they find their habitat too drafty, as well as dragging straw and twigs into their habitats to make a nest. Our two pigs have a pile of comfortable blankets so they rarely bring twigs inside, but we have found a few. More decorating perhaps?

These are no “dumb animals” rather we have found them to be more creative and thoughtful than many of the other animals we live with.

A Tail of Two Pigs